Building a fierce competitor for life.

Duke Blue Devil Coach Joanne P. McCallie has been building champions for over 29 years.  As one of the most highly decorated female college basketball coaches in the country, her philosophy, “Choice, not Chance” can be applied to sports teams, business teams, student athletes and even parenting.

Coach P is part of a very select group of coaches with almost 600 career wins, averaging an incredible 24 wins per season while coaching in 20 NCAA tournaments.

Joanne is a highly sought-after public speaker offering her philosophies in regard to motivation, professional development, parenting millennials, and physical and mental health.
Learn More

Basketball program enhancements for all levels of programs including Coach P’s 12 secret components to building her dominating Match Up Zone defence as well as multiple defenses for all team levels.
Learn More


With over 29 years of coaching and personal experience, Joanne brings her life lessons to her approach to overall health and wellness.
Learn More

Based on years of experience, Coach P’s philosophy allows parents to release the guilt, step back and watch their happy, high performing children develop while supporting them appropriately.
Learn More 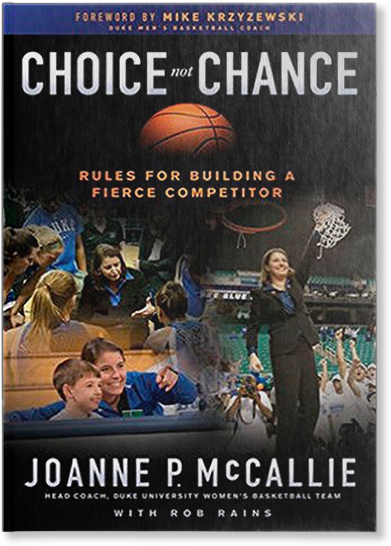 RULES FOR BUILDING A FIERCE COMPETITOR

Throughout her pioneering career in college basketball, Coach P, Duke Women’s Basketball Head Coach, has followed a simple philosophy: Choice, not chance, determines destiny. Choose to become a champion in life. From her first head coaching position at age 26 to her current role as head coach for the Duke Blue devils, Coach P has enjoyed sharing these principles with her winning teams, the youth in the communities where she and her family have lived and the greater public through her public speaking.

Choice not Chance is an incredible exploration into the life of a loving mother and phenomenal coach whose leadership for women’s basketball has truly been indispensable. She has time and again represented the highest ideals of sport and is a role model not only for her daughter, Maddie, but all daughters across our nation.

Joanne P. McCallie is inordinately bright and an exceptional leader both on and off the court. Her enthusiasm and passion for the game of women’s basketball and Duke University in general, is exceedingly contagious.

That passion comes through clearly in the pages of Choice Not Chance.

One of the things I love about Joanne is her energy. She’s very competitive, and she allows those around her to not only support her, but also make her better. Joanne has all of the characteristics of being a great leader. She conveys confidence and courage under pressure. In the heat of the game, the players feed off of this strength.

Whether you need a top female motivational speaker, healthcare speaker or inspirational keynote speaker, Coach P should be the first person you speak with. If you are a parent seeking help with your child athlete or you run a basketball program and want to take it to the next level, Coach P can help.

Learn how the “Choice, not Chance” methodology can benefit you and those around you. If you are ready to elevate to the next level, contact Coach P.